OPERATING FROM 01 APRIL TILL 31 OCTOBER – DEPARTURE FROM SORRENTO.

Operating on the following days: Tuesday

An excursion from Sorrento to Rome, though brief, will give you the opportunity to drink in the atmosphere of the Eternal City. During your trip you will be able to marvel at the city’s wonders that have lasted for nearly 3000 years, presenting an example of all that has occurred in Italy since, in history, art and religion.

Rome was founded in the eighth century on the hills that rise above the River Tiber. Today from Tiber Island you can still see the gateway that at that time marked the border between Etruria on the right bank, and Lazio on the left, emphasising the city’s importance as a place of passage for both people and merchants.

The beauty of Rome lies in the merging of different eras, with monuments from ancient Rome now integrated in monuments from the Baroque period, Mediaeval churches that rise above ancient pagan temples, and piazzas that imitate ancient monuments. Rome (known as Urbe to the ancient Romans) is a rich tapestry woven of many threads that integrate to form a city par excellence.

The journey between Rome’s two most famous monuments, the Colosseum and St Peter’s Basilica, is made along the Tiber, a journey which provides extraordinary glimpses of the city. Not far from Tiber Island is the Colosseum, an imposing amphitheatre that has formed the blueprint for a thousand other similar monuments across the world. The Colosseum was the site of the gladiatorial games, so loved by the Romans, that were organised according to the will of the emperor, who offered them to his subjects for free. The Colosseum was built next to the entrance to the Forum, a public space open to the citizens of Rome and of the entire Empire. The Colosseum also lies at the foot of the Palatine Hill, on which stood the Imperial Palace; the very word ‘palace’ originating from the word ‘palatine’.

During your excursion from Sorrento to Rome you can also visit St Peter’s Basilica, the seat of the Pope and the biggest and most important church in the world, which lies further along the river. The basilica contains more artistic masterpieces than many museums, and is instantly recognisable by its beautiful dome that was designed by Michelangelo, and by the colonnade that surrounds it, designed by Bernini. Close to the basilica lies the majestic Castel Sant’Angelo , a fortress that, in the past, provided refuge to the Pope if he were in danger. The castle was built on the foundations of the Mausoleum of Hadrian, one of the greatest Roman emperors, to demonstrate the connection between the ancient and modern period. 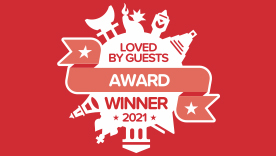